I jest. But I really don’t. It is Day 14, for what it’s worth. Day 14 since I last saw my students. I didn’t think it would end so soon. Don’t get me wrong. I’m still going to be having class, once this two-week spring break is done. But once I’m “back” in class it … END_OF_DOCUMENT_TOKEN_TO_BE_REPLACED 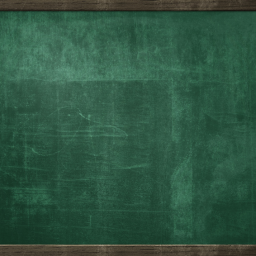 I walked into that classroom with chalk in my right pocket. It sat neatly ensconced in a box I had just picked up from the main office, but I had absolutely no idea what I was going to write with it. The room was large, about the size of the entire downstairs of my house, … END_OF_DOCUMENT_TOKEN_TO_BE_REPLACED 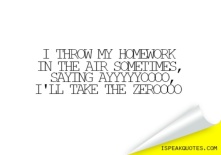 When I was in school there was the rare student who wasn’t frightened by the threat of a zero. It didn’t matter how hard a subject was, or how much homework was given, there was at least an effort given by most students to make sure they didn’t get that zero. Remember “the dog ate my homework”? That was an excuse meant to try and get more time to complete that homework and get at least some points for it. And parents supported teachers in their efforts to get students to take their work seriously.

But now, I’m not really sure what’s happening at home, but more and more students come to school with a different type of mentality, one that embraces only those things the student already feels comfortable with, and fights off anything else. That means if the student is good at English, he/she will do all  the work for English and get good grades in the subject. But if it’s math, and the student despises math, and/or has decided it’s too hard, that same student will give up and stop even trying. Regardless of the threat of the zero.

Then there’s presenting. One of the biggest parts of the new curriculum for teachers is speaking and listening for content, for information, and for understanding. Which means having to speak in front of the class on occasion. But too many students these days have decided they don’t want any part of presenting in front of their peers, for whatever reason, so they pull out the phrase that has gotten all too familiar of late… 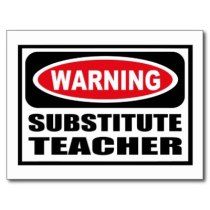 They took my fingerprints, and the only thing I could think while they were doing it was, “Damn, it’s going to be really hard to get this ink off my hands.” But it was all necessary, I knew, the only way to start the occupation I knew I wanted for the rest of my life. Even if the fingerprinting was merely to be a substitute teacher instead of the real thing. Everybody has to start somewhere.

A substitute teacher has to be malleable, to shift from day to day, quite unlike most other professions, which are rote.

I decided to substitute teach when I was in graduate school because the classes were mostly in the evenings, and I wanted to get my feet wet in the profession I was going to school for, which seemed smart at the time. What no one told me, however, was that substitute teaching is so different from actually having my own classroom and set schedule. I learned pretty quickly, though, once I got that first phone call to sub.

First off, the calling system was automated, so I had to set up my “profile” in the system before I could even be called to sub. Once that was set it was all about waiting. Usually the calls would come ridiculously early in the morning, and I would have to re-map my whole day around it. Since I didn’t know the area very well, I would have to ask my wife how to get places, then leave very early just in case I got lost getting there.

I learned pretty early on, too, that it mattered which position I was going to substitute for, if just to help my choice of attire. Once I got the call and it was for P.E. but I didn’t realize the difference until I arrived at the school in a full suit. My shoes weren’t even allowed on the gym floor, so I ended up walking around in my bare feet for most of the day, and I ditched the jacket about fifteen minutes into the first class session. END_OF_DOCUMENT_TOKEN_TO_BE_REPLACED

Now, why exactly did I bring this schoolwork home? I honestly have no clue. Maybe I thought I was going to find some time this weekend to actually get it graded so I could get it back to the students on Monday. But I think from the start that I was really totally deluding myself, … END_OF_DOCUMENT_TOKEN_TO_BE_REPLACED

Today was the first day of summer school, and for the third straight year I am teaching during the summer. It’s definitely an interesting thing, having students who have all failed more than one subject during the school year, but very few of them actually failed English (my subject matter). That makes it strange, teaching … END_OF_DOCUMENT_TOKEN_TO_BE_REPLACED