“Our names are an integral part of the faces we show to the world. If we’re judged first on outward appearances, we’re assessed next on our names.” ~Sharon Bolton The most popular boys’ name in the United States last year was Ezra, the biblical name of a forgettable Old Testament prophet. The name brings to … END_OF_DOCUMENT_TOKEN_TO_BE_REPLACED

“We can easily forgive a child who is afraid of the dark; the real tragedy of life is when men are afraid of the light.” ~Plato I fear the unknown. That’s my biggest fear. Because anything else I can see coming, even if I can’t necessarily adjust for everything else. But the thing that sneaks … END_OF_DOCUMENT_TOKEN_TO_BE_REPLACED

“You have but to know an object by its proper name for it to lose its dangerous magic.” ~Elias Canetti Her name is Elizabeth, and she’s made of no moving parts, or at least that’s what they told me when I bought her at Target’s electronics department. She wasn’t cheap, either, but that merely meant … END_OF_DOCUMENT_TOKEN_TO_BE_REPLACED

“What’s in a name? That which we call a rose by any other name would smell as sweet.” -from The Tragedy of Romeo and Juliet (II, ii, 1-2), by William Shakespeare

This famous line spoken by Juliet during her illicit rendezvous with her unsuitable paramour speaks volumes not just about her relationship but about the power we’ve given to names that perhaps shouldn’t reside there. If someone’s last name is Chan or Nguyen our minds are already searching for what we know about Chinese culture. If their first name is Tynisha or LaFawnda, we can’t help but imagine someone whose family originally derives from Africa. It’s human nature. But should it be? What really is in a name?

I remember when I first found the glorious internet. It was back in 1994 after I had graduated from high school never having access to the new technology. At college though, when I went to Temple University that fall, it seemed as if it had exploded all over the place. Suddenly, I had something called e-mail, and the college asked me what I wanted as my address. I could choose from virtually ANYTHING, so I took a day to figure out what I wanted. 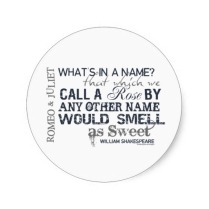 It wasn’t an easy choice, either. Most people I knew were using some variation of their first name, their last name, or some combination thereof, while a few used a generic nickname with some numbers attached for good measure. Of course I wanted to be different; I wanted to have an e-mail address that stood out from all the others, so I decided to go with “roach@astro.ocis.temple.edu.”

I have absolutely no idea why I went with “roach.” I detest those bugs with every fiber of my being, but I thought it would make an impression. In fact, I used to tell a story that I was part of a punk band called the 12 Roaches, but that was patently untrue. It did explain the address, though, so I stuck with it. And when it came time to interact with others on-line I took on the persona of The “Roach,” this person who was too cool to let others know his real name.

That’s when it hit me: a name is powerful. END_OF_DOCUMENT_TOKEN_TO_BE_REPLACED

Remember the last time someone turned to you and said, “I totally love your name,” and how awkward it was to choose a reply? I mean, you could have just said “Thanks,” and been on your way, but it’s hard to take credit for something you had no say in. You know, unless you changed … END_OF_DOCUMENT_TOKEN_TO_BE_REPLACED