Drunk people can be hilarious sometimes. Not alcoholics. They’re just sad. But you know the type of people I’m talking about, the ones who hardly ever drink, but after a long week at work they want to relax on a Friday night with friends, probably in a bar, a club or a restaurant, with a … END_OF_DOCUMENT_TOKEN_TO_BE_REPLACED 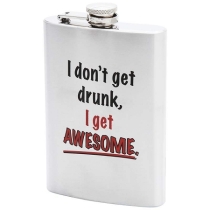 “So gather up your jackets, move it to the exits. I hope you have found a friend. Closing time. Every new beginning comes from some other beginning’s end.” -Semisonic

You know how it is at the end of the night (or the early morning in some cases), when you’re so tired you can barely hold your eyes open, but you know you have to somehow make it home, so you do. You don’t remember how you got home, but you woke up in the late morning hour with a hangover and a dreadfully hazy recollection of the night before. Perhaps you even have a text sitting on your phone from someone you don’t know, or at least not that you remember anyway, and their words hint at the two of you being best friends. You scratch your head and chalk it all up to the drinking, telling yourself you won’t get that drunk again.

But it’s a vicious cycle: the partying, the staying up until all hours, the random people you co-opt into being your “friends” for the night, and always the alcohol permeating everything else. I should know. I used to live that lifestyle. It was called my late teens. For some people it’s their entire twenties. For others it’s still going on now, and for those people I have a wealth of sympathy. It can be enticing, to get that buzz, to lose your inhibitions and do things you wouldn’t do sober, but it has its consequences. Believe me. Why do you think AA is so pervasive in our society? People want to stop, but it’s so difficult.

I’ll tell you a story. It was one night just like many others during that time period for me, when we had gone out drinking, then stumbled to somebody’s house (not sure who lived there, actually, even to this day), and the drinking picked up again. There was beer, and wine coolers, and hard liquor, and grain alcohol, and pretty much anything else you could think of. Sometime along the way I had gotten that pleasant, warm feeling that made me feel invincible. I called it my Superman buzz. It made me the life of the party. END_OF_DOCUMENT_TOKEN_TO_BE_REPLACED