Do you remember when the new building went in downtown and you were overjoyed? It

was 50 stories high, easily the tallest building you had ever seen in person. And you had gone down to watch the men working (they sometimes whistled at you), knowing that someday you would be able to go inside. Then someday came and you saw how spacious the lobby was. All the men and women hustled in and out of its doors, and you were one of them. You felt special. But then a year passed, and the building wasn’t quite as special anymore. You weren’t sure why until you saw that they were about to start construction next door. And it happened all over again. Your adrenaline got pumping, your hopes sparked, and before you knew it, there was now an 80 story building that had you enthralled. And the poor 50 story building, as grand as it had seemed, just faded in comparison, disappearing from your view. This is what I call the Tevin Campbell syndrome.

For a brief period of time, he was one of the biggest R&B acts in the world, but he never lived up to the increased expectations.

I’m sure you don’t even remember at this point who Tevin Campbell is, unless you’re a Generation Xer like me, but he was the seeming heir apparent to Michael Jackson in the 1990s. He was even being produced by Michael’s former producer, Quincy Jones, and had people writing for him the likes of Prince and Diane Warren. And he was good too. He had a soulful voice that could also sing pop at the flip of a switch. With slick producing, and a boy-next-door look, Tevin Campbell took us for a ride that included such hits as “Round and Round,” “Can We Talk,” “I’m Ready,” “Tell Me What You Want Me To Do,” and “Always in My Heart.” For a brief period of time, he was one of the biggest R&B acts in the world, but he never lived up to the increased expectations. We checked out the lobby, and it was wonderful, but a larger building was built that dwarfed him in comparison, through no fault of his own. That larger building was called Usher, and the neo-soul revolution. 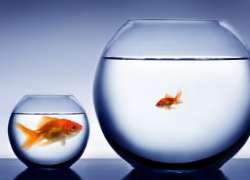 And it’s happened time and again throughout the course of history. This was just one example of someone or something not maintaining position because of a rival who comes out of nowhere and takes over. I’ve often wondered how the ones who lost out feel after they’ve been replaced. Imagine you’re the top lawyer in your firm. Your billable hours are higher than everyone else’s, you win 90% of your cases, and you have a great record when it comes to settling out of court for huge amounts of money. You’ve been the top lawyer at your firm for five years, you’ve settled into the role, and you like lording it up over others. However, a new associate comes along who has more drive, more charisma, and better settlement rates. She also wins 95% of her cases that make it to court, and before you can blink, she’s been made partner and you’re still sitting on the sidelines. Through no fault of your own, you lost out.

There’s always something bigger and better out there. It’s inevitable.

You see, there’s always something bigger and better out there. It’s inevitable. Some of us go our entire lives being big fish in a little pond, so we think the world owes us something, or we simply take it for granted, like Tevin Campbell. The expectations were overwhelming, and life took a different turn for him, as it does for us sometimes. The trick is how we deal with those twists and turns, how we adjust to the person who comes along who is a bigger fish in our pond. Do we decide we’re now worthless? I hope not, because we’re not. We’re still just as incredible as we always were, even if others don’t see it because our sun has been blocked by a cloud. We need to, like Tevin Campbell, channel our energies into what makes us happy, despite the odds, or the other people who come along to steal the spotlight. Did you know that we can do a lot more from behind the scenes?

10 thoughts on “The Tevin Campbell Syndrome”